Cloudways – Which Server is Best for WooCommerce/Dynamic Sites?

If you are building an eCommerce/WooCommerce or a Dynamic type of site on Cloudways, then it’s important to choose the right server on Cloudways.

Not all of them perform the same.

So we’re going to do some WooCommerce checkout tests on each of the 5 cloud providers on Cloudways.

The Difference between a WooCommerce/Dynamic site and a Static Site

A “normal” Static Website is basically a website that doesn’t really change. It’s mostly images, text and the layout is the same for all users. Basically, with a static type of site, it can be easily cached (data stored in the temporary storage), and then it can be delivered to the next visitor faster.

This means that most of the content/data doesn’t need to be pulled from your storage/database every time a new visitor comes to your site – resulting in faster load times.

However, with a WooCommerce or Dynamic Website, some of these pages can’t be cached because the information is different. I.e. Cart and Checking Out.

Therefore every time a customer checks out, it will require that content & data be delivered directly from the storage/database rather than just the cache.

If the server is slow, it can’t be “masked”. If it’s fast, then it will really shine.

So let’s get started with our tests to find the best server for a WooCommerce/Dynamic website.

So, for these tests I’ve set up servers on all the providers:

And for this test, we will using RoboSwarm. Essentially what this tool does is that it’s going to simulate an entire checkout process for our WooCommerce websites including adding 2 products to our cart.

All sites are identical with the same settings, Breeze Cache Activated without any CDN. 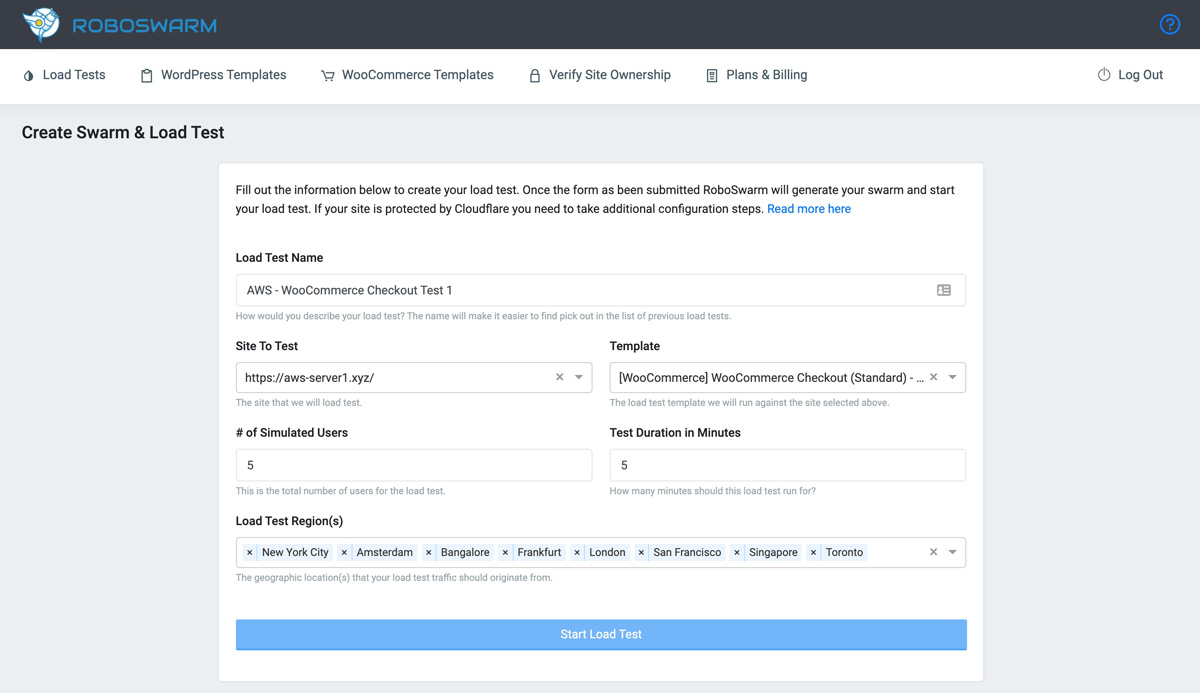 I have also tested them twice at different times (once in afternoon, another at night), to get an average. And with 8 locations tested, it will give a more complete look at how it will perform in the real world.

Here are the results

AWS performed the best, with 99% of WooCommerce checkout times loading under 0.510 secs. Their response times for other pages were also great at under 0.9 secs.

Note: The server tested had 2GB Ram with 2 vCPUs (smallest I could select).

Coming a close second is Vultr High Frequency with 99% of WooCommerce checkout times loading under 0.530 secs. Their response times for other pages were all under 1.2 secs.

In third place was Google Cloud, 99% of WooCommerce checkout times loading under 0.735 secs. Response times for other pages were under 1.1 sec.

Note: This was their small server with 1.7GB of RAM

Next was Vultr, with 99% of WooCommerce checkout times loading under 1.04 secs.

The checkouts were actually lower than Linode. However, If you are getting 100+ checkouts every 5 minutes – I’d definitely consider AWS anyway since you’ll be making more than enough to cover the higher costs.

DigitalOcean standard actually performed better than the Premium from my tests. The Checkout response times were 1.225 seconds and with an average of 100 checkouts.

Linode performed okay too, with the 1.35secs for the WooCommerce checkout. However, they did perform very well in terms of checkouts with 121.

Surprisingly, DigitalOcean Standard performed better than Premium droplets. It may be because of the heavier load on the Premium droplet servers. Yes, you do get sort of a virtual private server on Cloudways with “dedicated” resources – however, the CPU can be shared at times.

On another note, DigitalOcean launched two Premium droplets (Intel & AMD) but on Cloudways we only have access to the Intel Processors. And from an independent test done, AMD did outperform the intel processors.

If I had the budget and was creating a mission-critical eCommerce/Dynamic website I would choose AWS.

Why? The speed is the fastest, and the times were very stable without much variation. They are also one of the most reliable (along with Google, they reported fewer incidents on Cloudways). You also have the ability to scale down automatically (without cloning, unlike Vultr HF).

My second choice would be Vultr High Frequency, the performance was very similar to AWS. They are around x1.5 cheaper than AWS (if we compare the 2GB RAM server at $26/mo). You can scale up like any other server, however, you have to clone the server (to scale down) and change the IP address. This can cause 15-20 minutes of downtime as the server propagates to the new IP address.

The others are not bad either, especially if you compare them to other hosting companies. So, If you want high performance that’s affordable (starts at $10-13/mo) and able to set up & manage servers without any technical skills, Cloudways is the way to go.

Get Started for FREE on Cloudways

How Does it Compare to Other Hosting Providers?

SiteGround’s checkout time is around 4.25sec+. Not very fast. But response times were okay at around 1.9secs (P99).

Hostinger Business Shared Plan is around 2.8secs. Not too bad.

Namehero performed well with around 1.95sec.

WPX compared well to Cloudways with around 0.82 secs checkout time. However, Pricing is around $25/mo for their business plan (limit of 5 sites). It’s more expensive, but their customer support response times were the best I’ve tested (under 30 secs 1st-time reply).

What's up guys :) Currently, in Melbourne Australia. Can't wait to get back to travelling Asia! Check out my YouTube channel for more.

Hey! It’s Hogan here. On this website, you will find tutorials and insights to help to start and build your business. You can also expect to find resources about Affiliate Marketing, SEO, reviews, and special deals.

This website uses cookies to improve your experience while you navigate through the website. Out of these cookies, the cookies that are categorized as necessary are stored on your browser as they are essential for the working of basic functionalities of the website. We also use third-party cookies that help us analyze and understand how you use this website. These cookies will be stored in your browser only with your consent. You also have the option to opt-out of these cookies. But opting out of some of these cookies may have an effect on your browsing experience.
Necessary Always Enabled
Necessary cookies are absolutely essential for the website to function properly. This category only includes cookies that ensures basic functionalities and security features of the website. These cookies do not store any personal information.
Non-necessary
Any cookies that may not be particularly necessary for the website to function and is used specifically to collect user personal data via analytics, ads, other embedded contents are termed as non-necessary cookies. It is mandatory to procure user consent prior to running these cookies on your website.
SAVE & ACCEPT